It has been a while since I posted last, as we have been hung up in bureaucracy as we pursue permitting for Echo Hills Cottages. I decided to focus on architectural design, thinking I could work on the infrastructure while the first house was being built. I was mostly right but, when I went to get the permit for the first house, I found out that I needed the sewer permit first.

What I thought would be two or three weeks has now passed two months and we are still a few weeks away. We ran into one thing after another that held things up, but it looks like we are now over the hurdles and only waiting for the final approvals and paperwork.

Although it has been frustrating, it has given me a chance to work on other things that have been delayed. We have our conceptual site plan completed for building two clusters of five house each. I also have been able to get most of the remodeling done for another phase of the common house. I am even much farther on the collaborative leadership program that I have been developing.

Hopefully we will be breaking ground for building the first house by the end of the month, which most likely will be the subject of my next post. For now, here is the drawing of the conceptual site plan – click on it to enlarge. 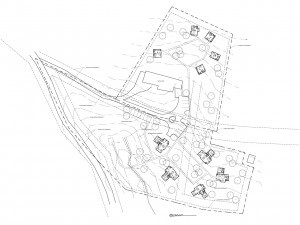